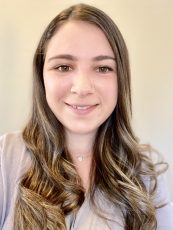 There’s actually been a lot of research on this topic. The whole idea started when a college student did a research study in the 1970s on 135 students living in her dorm. The study concluded that period syncing was a real thing that people who menstruate experience when they’re in close contact with other people who menstruate. This confirmed the belief many people held from a wives’ tale regarding this topic. This idea of period syncing became known as the McClintock effect, named after the student who did the study. McClintock proposed that when two menstruators were around each other a lot, their pheromones (which are chemical signals released by the body) would communicate and adjust their periods to make them happen at the same time.

Later, additional research proved that this was actually NOT the case–pheromones don’t communicate or cause synched menstruation as McClintock suspected, and period syncing didn’t really happen.

Even though the initial study has been debunked by many studies since it was first conducted, a lot of people still believe in period syncing. A study from 1999 found that 70% of the of the 122 women polled believed that they had experienced period synchronization.

So why is it that people believe that their periods are influenced by those around them even when research shows that they are not? One explanation is something called confirmation bias. Simply put, people who believe that periods do sync-up are more likely to look for proof that they are correct. So, even if they’re only occasionally menstruating at the same time as a friend, those infrequent occurrences can make them feel that it is more than pure coincidence. Another reason this myth may persist has to do with memory. People are more likely to remember the times that they were on their periods at the same time as others then they are to remember the times that they were not.

Menstruating at the same time as a friend or a loved one can feel like a powerful thing. It can be tempting to think it’s more than coincidence, but the truth is that menstrual cycles vary from person to person, and at some point, two people’s cycles are likely to overlap. Although there is no evidence that this is due to anything but pure coincidence, the next time your cycle comes on at the same time as a friend or loved one, celebrate it!