The Menstrual Cycle and Pregnancy: What is the Fertile Window?

By Caridad Infante, Period Pro from University of Central Florida College of Medicine

Periods, fertility, pregnancy – how are they all related? Whether you’re trying to get pregnant or trying NOT to get pregnant, this is an important connection to understand. If this sounds like a lot to learn, don’t worry, you’re not alone. Periods and the timing of pregnancy can be confusing for everyone, and we’re here to help explain it. 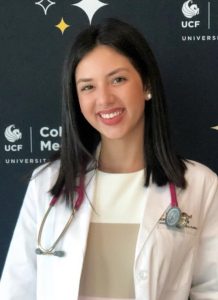 The fertile window is the time in a menstrual cycle in which intercourse should have the highest probability of resulting in pregnancy. But how can you know when it’s happening?

Before we delve into that, let’s review the menstrual cycle itself, which begins the first day your period starts. At the same time your period begins, new eggs are starting to grow and mature in the ovary. Basically, the ovaries are “preparing an egg” and giving it time to grow. This is called the follicular phase. The first egg to grow large enough is the one to be released from the ovary. This egg then is pushed down the fallopian tube and is able to be fertilized by sperm for about 24 hours afterwards. This process is called ovulation.

How does ovulation connect to pregnancy? In order for an egg to be fertilized, at least one healthy sperm must reach the egg while it is traveling in the Fallopian tube. Sperm can actually survive for 5-7 days in the female reproductive tract after unprotected sexual intercourse. This means that you can become pregnant anywhere from 5-7days before ovulation to a day or two after ovulation. It can vary slightly from person to person, but that is your fertile window! 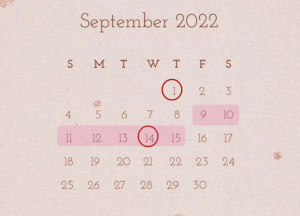 So, when does ovulation happen? As we’ve talked about on this page, everybody’s menstrual cycle is different, which means the ovulation day and fertile window are also different for everybody. For any menstrual  cycle, ovulation occurs 14 days before the start of the next period. So if you typically have a 30 day cycle, and your period starts on September 1st. You would expect your next period on Sept 30, and ovulation 14 days before that—so Sept 16. Your fertile window can span from up to 5 days before ovulation to 1 day after ovulation (highlighted in pink on the calendar below!).